From November 23-26, 2017 JEF Czech Republic and Bavaria co-organised a Czech-German Student Conference entitled The Role of Media and Information in the Current World and Politics in the Golden City of Prague. The event was attended by JEFers from the Czech lands, France and from several German sections as well as by members of the Czech and German Union of European Federalists, amounting to a total of about 30 participants.

A discussion evening in the baroque villa Portheimka in Prague – Smíchov with the topic The Image of the European Union in the [Czech] Media marked the opening of the conference. Invitation to the discussion was received by the publicist and former adviser to the Committee on Foreign Affairs, Defence and Security of the Senate of the Parliament of the Czech Republic Petr Fleischmann, the Secretary General of the Union of European Federalists in the Czech Republic Ivo Kaplán, the spokesperson of the European Commission Representation in the Czech Republic Magdaléna Frouzová, the former State Secretary for European Affairs Tomáš Prouza, the Rector Emeritus of Charles University and President of the Committee on EU Affairs of the Senate of the Parliament of the Czech Republic Václav Hampl and the incumbent State Secretary for European Affairs Aleš Chmelař. The discussion was moderated by Anežka Fuchsová from the Institute for Christian Democratic Policy.

The program of the evening was divided into several parts – after the organizers’ welcoming words, two short presentations introducing the topics were held, followed by two panel discussions.

The first presentation, prepared by Ms Frouzová, focused on communication of the European institutions with the public (particularly regarding EU policies and the practical functioning of the institutions themselves) and used Euromyths as an illustration of the most common problems. The second presentation, by Mr Fleischmann, dealt on a theoretical level with the European societies’ views on supranational cooperation being strongly influenced by their respective national roots.

In the following first discussion round (attended by Ms Frouzová, and Messrs Fleischmann, Kaplán, and Prouza) were discussed the grounds of Czech Euroscepticism as well as suggestions how to face it. The Czechs are for instance, according to Eurostat, the most critical nation towards the common currency. The panellists agreed on the need to raise the public awareness of European issues, the lack of which was considered to be the main cause of distrust in the EU and its institutions, and the urgency of vigorous and constructive action on this issue by politicians and the media.

The second debate (with the participation of Messrs Kaplán, Hampl and Chmelař) was rather focused on the presentation of European topics and the form of the public discussion. According to the panellists, the Czech discussion about the EU is too cold and sterile, only confined to providing factual information and does not aim at targeting positive themes or emotions. In this context, Aleš Chmelař mentioned as an example the successful campaign of Emmanuel Macron, who managed to bring a constructive approach and pro-reform enthusiasm to the public discourse. This must be achieved on the Czech political scene as well.

The conclusion of both panel discussions was reserved for questions from the audience. They were directed especially to the predictions of the future development and concerned the attitude of the young generation of politicians or particular political parties. The panellists have pointed out a growing positive trend, manifesting itself especially by willingness to reflect on the European agenda.

The first soirée was concluded with a common dinner, which provided space for getting to know each other and for further discussion.

Town walk and discussion in the Czech Parliament

On the next morning, the participants met in Prague’s Lesser Town for a guided visit of the German embassy in Palais Lobkowitz. A member of the diplomatic body led the group first into the garden, where in 1989 East German refugees gathered and were finally allowed to leave for the Federal Republic after Hans-Dietrich Genscher’s personal intervention and speech held from the embassy’s balcony. After that historical excursion, the group was hosted in one of the baroque interiors and a question and answer round took place, during which the diplomat not only described the embassy’s approaches towards the changed political scene after the most recent Czech parliamentary elections, but also provided insights into the processes and career options of the German Foreign Service.

After the visit at the German embassy, the conference’s core panel discussion took place in the premises of the Czech House of Deputies, the lower chamber of the Czech Republic’s bicameral parliament. Under the title Transformation of Contemporary Media, the Role of Propaganda in Them, and How to Fight Against the Latter a panel consisting of Dr. Claudia Riesmeyer (an expert in the field of media competence from the Institute of Communication Science and Media Research of Munich’s Ludwig Maximilian University), Markéta Krejčí B.A. (a student of the European Studies curriculum at Brno’s Masaryk University being in charge of the Czech Think Tank European Values’ project “Kremlin Watch” which aims at reporting instances of Russian interference in Czech media and political discourse) as interlocutors, and Robin Mudry (president of JEF Bavaria and student of the European Studies curriculum at the Catholic University of Eichstätt-Ingolstadt) as host, discussed for nearly four hours with some 25 people from JEF Czech Republic, Germany and France and representatives of both Czech and German UEF in Smiřický Palace. 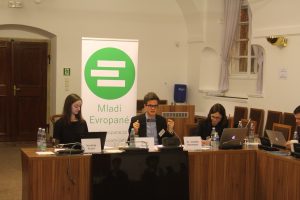 After some introductory thoughts by Robin Mudry on the evolution of information (politics), censorship, and the shift from decision-making on the basis of a commonly agreed “truth” towards debating the notion of “truth” itself in a post-factual world, the panel engaged in the discussion about who is entitled to define what is “true”. Acknowledging that on the one hand “truth” is no given absolute and rather a category to be dealt with and that on the other hand traditional “truth” authorities such as journalists and politicians are more and more failing to fulfil their role, the panel came to the conclusion that the critical individual is all the more in charge. In order to assume this responsibility people must acquire media literacy as a key competence. Dr. Riesmeyer then elaborated on the four main aspects of media competence being critical thinking, technical skills, self-competence and social competence. These skills are to be conveyed by different actors. While parents play a key role in the early stages of life, it should be at the heart of scholar curricula to sensitise pupils to media and their intricacies. This being a rather top-down approach requiring political will and reform in the education system, it is for the time being also up to NGOs – such as JEF – to work with people on media-related issues.

At this point, the usual question of how reaching the envisaged audience came up and the argument was namely made for a positive narrative regarding the EU. In this context, Markéta Krejčí explained and exemplified how Russian propaganda in the Czech Republic is working and claimed that this kind of anti-European interference would have been much less successful, if there had been a proper coverage of EU matters in the first place. In what followed, the debaters’ concern was to think of the right pro-European communication strategy. While many examples for concrete political action such as a reform of the system for the European elections (including European parties and cross-border candidates) were made, it crystallised that without innovative communication tools and a more general effort to increase media literacy, a change in the general Eurosceptic mood is unrealistic. Whereas some of the participants upheld the idea of fostering the EU as a brand according to marketing strategies, others objected that the EU was far too complex to be sold as an ordinary commodity. A consensus could be reached on the necessity of linking positive experiences regarding the EU with knowledge and facts about it.

Finally, the discussion shifted to how JEF as an organisation could and should act in this time of political sullenness, assaults on the basic values of the liberal democracy and European integration, and the erosion of “truth” authorities. In a democracy, citizens should be empowered and enabled to engage in public discourse, to participate in elections (and referenda) and to act as mature members of a polity. In order to achieve this, JEF should first continue its work of informing people about the EU, its proceedings and its purposes, but second and most importantly, JEF has to address the problems Europe is facing, it has to deal with the arguments brought up against the EU rather than dismiss them as “fake news”. It has to critically self-reflect and at the same time to provide with conviction a new vision for the future of Europe. Federalism can in this context be a concept which goes beyond upholding a status quo that has permitted the disavowals of the present.

Workshop on media literacy in the 21st century

After closing the conference’s central day with another common dinner, the European guests were introduced into the Czech capital’s nightlife. The next morning, Dr. Riesmeyer conducted a workshop on media literacy in the 21st century, deepening the participants’ knowledge in the field and focussing on the practical consequences from the previous panel discussion. In the afternoon, a city tour was organised and the participants took a walk along the traditional coronation way from the Republic’s Square on the border between New and Old Town, crossing world famous Old Town’s Square, Charles Bridge and reaching Lesser Town below Prague Castle. Again the official program was concluded with a common dinner.

On Sunday morning, the participants met for a final workshop, with the objective of evaluating the conference and discussing the future Czech-German cooperation in the framework of the JEF twinning program. Amongst others, Czechs and Bavarians convened to send a joint delegation to the European Youth Event in Strasbourg. Two conferences are envisaged for the year 2018: the Passauer Gespräche in May and another Prague-based Czech-German conference in autumn.